Developing a Business with Two Partners

Session about developing a new business with two business partners.

Session about developing a new business with two business partners.

Last week two clients came to me, to work on starting a new creative business. They had ideas, plans and estimations, but couldn’t decide where to start and what style of business development they needed to apply. One partner had a bigger view about creating a serious business plan and starting a wide scale of operations and another partner wanted to start small, just with several items to promote.

First, we did personal exercises with one partner then with another. We were researching the polarities they had in their inner realm. We looked for one energy, which moves them forward to develop the business, and for the second energy, which blocks and prevents the movement. We explored and unfolded both polarities and did exercises to balance and integrate them.

As an example I can describe one partner’s process. After discussion we recognized two tendencies, two energies. One energy was a passion to expand, to grow and become seen in the world as a successful and creative person. The client identified this energy as “positive”, the one which helps the business. The other tendency this client identified as laziness. This one was a desire to spend a lot of time in a calm meditative comfort. When we explored the second energy, which at the beginning was described as a “negative”, “slowing down”, the client noticed that this protected, comfortable meditative is necessary to come up with new creative ideas and it feeds the second, “active energy”. After we did several exercises with visualization and movement, we found a new style of moving forward with respect to both polarities - one which is more active and one which is more passive.

After the first part of the session both partners received new insights about resources they can bring to this business. They learned how they can turn blocks and negativities into allies.

The next step was “couple’s work” between the two partners to understand each other’s styles, strength and resources and to see various ways of bringing them together. We used some role-playing, movements and earth-based meditation.

As a result of the session both partners visualized a new way to combine both ideas – to start small and to develop a bigger picture at the same time. They made a plan for the next step, which satisfied both of them. They also came to better understand how some of the qualities they considered a weakness, can be a great strength and a source of wisdom and new ideas. Both of them felt energetically uplifted, more joyful and sure in a successful future because they realized that what they considered problems - could be just untapped resources.

When I facilitated this session I used my knowledge in system constellation, process work and earth based psychology.

I am so excited about this work! Every time that I help people to manifest a new creative project, I feel more realized myself. I would be happy to assist in similar research with skype, or private sessions. 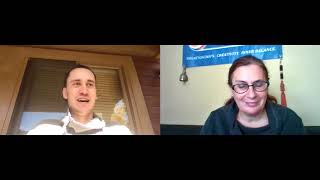